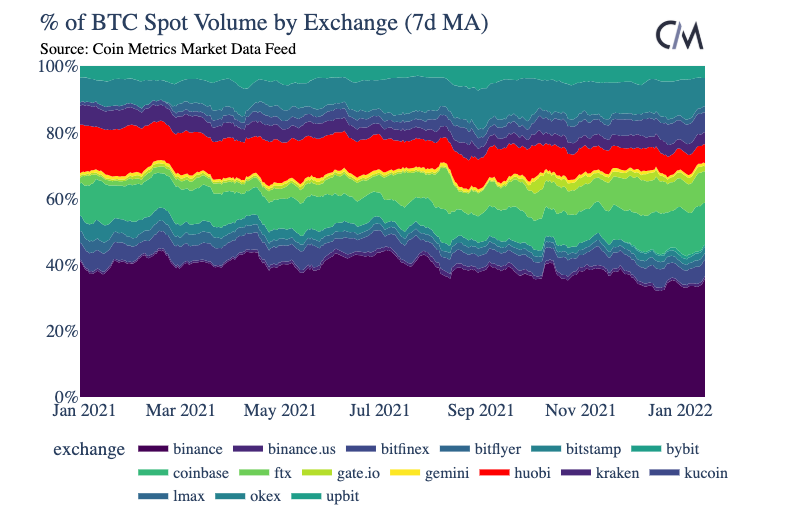 An analysis of trading volumes on major crypto exchanges has revealed a geographic shift in crypto trading activity.

According to a report by crypto analysis firm Coin Metrics, the most prominent such shift in geographic activity has been the reduction of volume on China-focused exchanges over the past year. This has been caused both by the country’s fresh crackdown on mining, as well as a renewed ban on most other activities related to crypto, Coin Metrics wrote, while pointing to Huobi as an example.

“At the beginning of 2021, trading on Huobi accounted for roughly 15% of spot volume across the selected group of exchanges below. Today, that share is down to around 5%,” the report said, referring to a chart that showed a decreasing share of volume being traded on China-focused exchanges such as Huobi.

FTX’s share of bitcoin spot volume rose from 1% at the beginning of 2021, to 10% a year later. At the same time, Coinbase saw its share of the volume rise from 9% to 14% during the year, according to Coin Metrics.

The firm further said that the same trend could be seen when looking at the different exchanges’ share of ethereum (ETH) trading volume. However, a noteworthy difference here was that the share of volume traded on OKX (formerly OKEx), another historically China-focused exchange, has not seen much of a decrease.

Additionally, Coin Metrics touched on the previous speculation that some of the selling pressure seen in the crypto market towards the end of last year may have been caused by exchanges suspending service for Mainland Chinese users by the end of the year, leading some users to sell their assets.

“It is tough to determine, but some have posited that this may in part explain some of the recent selling pressure towards the end of 2021,” the firm wrote.

Meanwhile, the report said that in addition to exchange trading volumes, on-chain data also supports the idea that activity is shifting out of China and moving west.

“The percentage of total BTC and ETH supply on Huobi has fallen considerably,” the report said. It added that US-focused exchanges “seem poised to capture an increasing share,” helped in large part by the major shift of Bitcoin mining out of China and to the US, which has now become the epicenter of global Bitcoin mining.
___
Learn more:
– Crypto Exchanges in 2022: More Services, More Compliance, and Competition
– Crypto Investment Trends in 2022: Brace for More Institutions and Meme Manias